‘Breds’; ‘The OGs’; ‘The Banned.’ No matter what you call them, there’s no denying the impact that the Air Jordan 1 Retro OG Shoe has had on sports, fashion and culture. The shoe that started the Jordan revolution, the Retro OG Banned is as legendary as it is iconic, soaked in history, having inspired countless ballers across the world.

The first ever shoe to come out of the Jordan workshop, the Retro OG was unmistakable with its classic high-top silhouette and striking black and red colourway, earning it the name ‘Breds’ among fans. Legend has it that in 1985 when Michael Jordan first laced up his signature basketball sneakers, the Breds were banned from the NBA for breaking the ‘uniformity of uniform’ regulation. Despite being “thrown out of the game”, Jordan continued to wear the shoes anyway and on every occasion Nike footed the $5000 fine for doing so. The details of this story can be hazy, but one thing was clear: the Breds became a symbol of defiance and rebellion, witnessing sheer explosive talent on the court and taking on a larger than life persona on the streets. 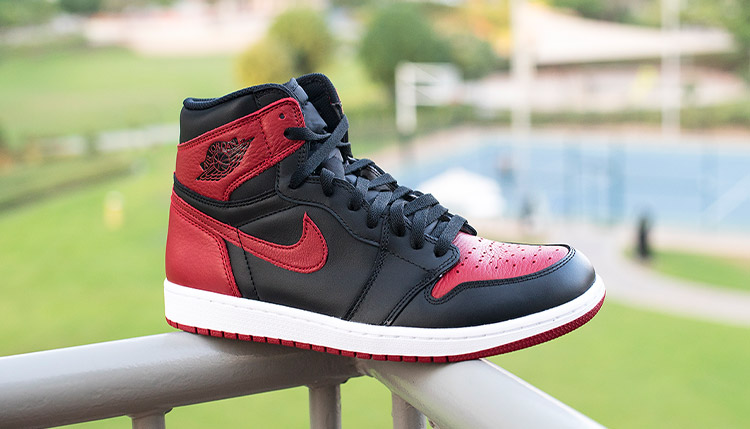 Remastered and released several times over the years, the Breds, or the ‘Banned’ as they came to be known, have been coveted by sneakerheads everywhere. It can be hard to describe what makes this classic silhouette so admired. Perhaps it’s the premium full-grain leather upper with a plush feel and lightweight fit that makes it legendary, or maybe it’s all about the thicker, extra spacious toe-box. It could be the rubber cupsole with encapsulated Air-Sole unit in the heel that delivers lightweight cushioning, or the rubber outsole with deep flex grooves and pivot point that enhances traction and flexibility. We think it’s more about how all of these elements come together to form an iconic shoe that has changed the game of basketball forever.

Now you too can own a pair of the Air Jordan 1 Retro High OG ‘Banned’ Shoes and be part of the legacy, simply by taking part in the SSS Jordan Giveaway. All you have to do is follow the steps below.

1. Shoot a video of yourself dribbling, dunking, shooting, alley-ooping or performing any other move that brings alive the Jordan in you.

It’s your time to own the sneakers that have built a legacy of performance and style over the years. Participate in the SSS Jordan Giveaway and win yourself a pair of the Air Jordan 1 Retro High OG ‘Banned’ Shoes. And while you’re at it, get your Jumpman gear on by checking out the latest range of Jordan products online, only at Sun & Sand Sports.