Kit The Kids Out With Their Favourite Team Jerseys

The football season of 2016-17 was a year of excitement, aggression, competition, camaraderie, and like every other year – celebration! A new season approaches and with it, bringing every emotion felt the previous year plus a whole lot more. Join in on the new season hype and include even your little ones as they get kitted out in their favourite football team kits. Let’s take a look at the jerseys and shorts from some of the best teams from around the world, handpicked for your children.

Let’s start off with one of the best teams in the world, FC Barcelona – the club that houses talents such as Lionel Messi, Luis Suarez, Neymar Jr, and many more. Let your child become a part of this enigmatic team with the Nike Kids’ FC Barcelona Home Stadium Kit, 2017/18 that features the Barcelona jersey and shorts paired with matching socks. This kit features the renowned club’s classic colours of red and blue along with Dri-FIT fabric that wicks sweat away as they play through the day.

One of the biggest football clubs to come out of the German league, Bayern Munich has been a dominant force winning 27 titles since the formation of the Bundesliga in 1963. The current form of the consistent champions of German football is the best it’s been as they’ve won 9 titles within just 13 years. Pride yourself and your child with the colours of the Bundesliga giants in the adidas Kids’ FC Bayern Munich Home replica Jersey and the adidas Kids’ FC Bayern Munich Home Replica Shorts. The jersey as well as the shorts have been made with ventilated climacool fabric and feature mesh inserts for ventilation. 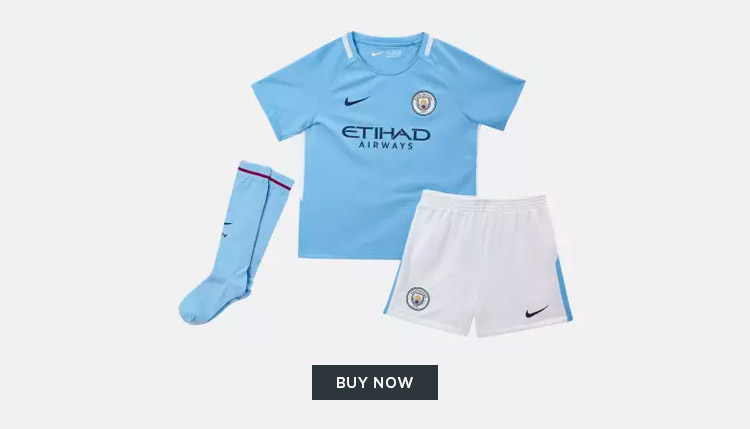 Manchester City always played second fiddle to Manchester United throughout their footballing lifetime but ever since Sheikh Mansour’s takeover of the team, City has won 2 league titles and the team has consistently been overshadowing their Manchester rivals with every chance they get. A team with a very bright future ahead of itself, you too can join in and become part of the Blue Moon revolution with the Nike Kids’ 2017-18 Manchester City Home Kit. This kit features advanced Dri-FIT technology to keep you comfortably dry and a fold-over elastic waistband with a drawcord for a secured fit.

Get ready for the new football season with Sun & Sand Sports. Shop online now for the latest in football jerseys, shorts and kits today. Also subscribe to our newsletter to stay updated on the latest in sportswear and trends.